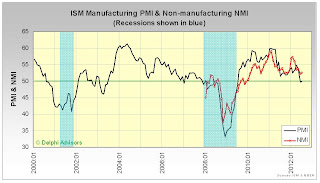 Manufacturing contracted marginally agin in July, with the Institute for Supply Management’s (ISM) PMI ticking up to 49.8 percent, from 49.7 in June (50 percent is the breakpoint between contraction and expansion). After reciting some report details, Bradley Holcomb, chair of ISM’s Manufacturing Business Survey Committee, concluded with, “A growing number of comments from the [respondent] panel this month reflect a slowdown in their businesses and general concern over increasing economic uncertainty." 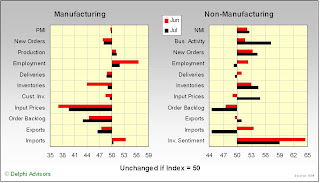 Wood and Paper Products both contracted in July; about the only good news is that customers’ inventories shrank, which could result in additional new orders in the future. "We have noticed a marked slowing in business overall,” said one Wood Products respondent, having “confirmed this with other companies in our industry as well." Construction and Ag & Forestry also reported contraction in overall activity, while Real Estate expanded thanks to new orders.

Prices for copier paper increased in July, while fuel prices rose in some areas and fell in others. No relevant commodities were in short supply.
Posted by DocH at 11:47 PM