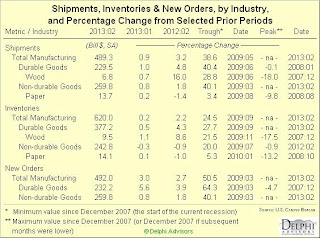 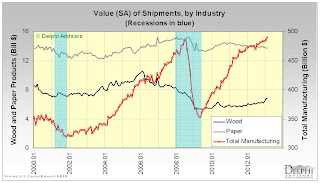 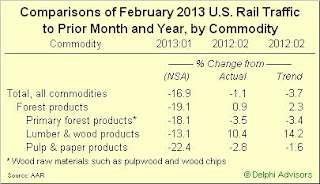 Click image for larger view
Data from the Association of American Railroads () and the American Trucking Associations’ (ATA) advance seasonally adjusted For-Hire Truck Tonnage Index help round out the picture on goods shipments. AAR reported a 16.9 percent decrease in not-seasonally adjusted rail shipments in February (relative to January), and a 1.1 percent drop from a year earlier; on a trend-line basis, total shipments were off 3.7 percent from a year earlier. Excluding coal carloads, year-over-year shipments were up 1.5 percent. Seasonal adjustments reversed the 16.9 percent January-to-February decrease, changing it to a 2.3 percent increase. Rail shipments of forest-related products were higher in February than a year earlier, thanks largely to a 10.4 percent jump in lumber and wood products shipments. The ATA’s advance index showed a 0.6 percent expansion in February. 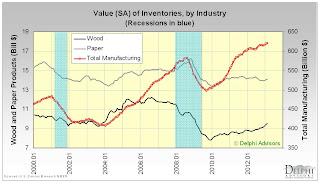 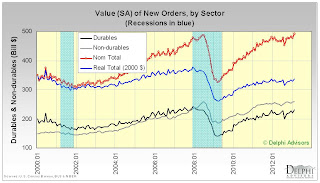 Click image for larger view
New orders for manufactured goods increased $14.5 billion or 3.0 percent to $492.0 billion in February -- the highest nominal level since the series was first published on a NAICS basis. Expectations for the headline number were just slightly lower, at 2.9 percent. Excluding transportation, however, new orders increased by only 0.3 percent.
New orders for durable goods increased $12.3 billion or 5.6 percent to $232.2 billion, led by transportation equipment, while nondurable goods orders increased $2.2 billion or 0.8 percent to $259.8 billion.
Although the Census Bureau’s February 2013 estimate of new orders for manufactured goods set a new record in nominal terms, converting to real, inflation-adjusted terms reveals a quite different story. On that basis, new orders have recouped only about two-thirds of the loss incurred since December 2007 and are still almost 4 percent below January 2000 levels. More worrisome for the future is the observation that new orders appear to have flattened out in real terms.
The foregoing comments represent the general economic views and analysis of Advisors, and are provided solely for the purpose of information, instruction and discourse. They do not constitute a solicitation or recommendation regarding any investment.