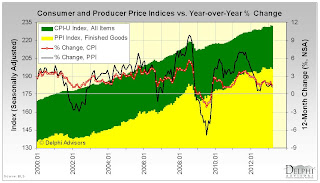 Click image for larger version
The seasonally adjusted Consumer Price Index () decreased 0.2 percent in March -- notably below expectations, and the largest “miss” in seven months. Over the last 12 months, the non-seasonally adjusted all-items index increased 1.5 percent. The main driver of the drop was the change in gasoline prices (-4.4 percent relative to February). These changes in the are consistent with the Cleveland Fed’s estimates of median and trimmed-mean .
The seasonally adjusted Producer Price Index for finished goods (PPI) decreased 0.6 percent in March. At the earlier stages of processing, prices received by manufacturers of intermediate goods fell 0.9 percent in March, and the crude goods index declined 2.5 percent. On an unadjusted basis, prices for finished goods increased 1.1 percent for the 12 months ended March 2013, the smallest year-over-year advance since a 0.5 percent rise in July 2012. 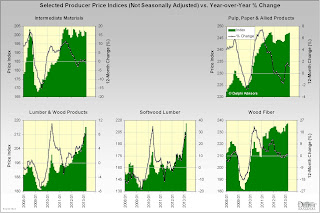 Click image for larger version
Price changes may be fairly tame overall, but solid wood-related price indices are either at or near their highest levels since at least 2005. Softwood lumber prices, in particular, are up 30 percent in the past year.

Click image for larger version
The foregoing comments represent the general economic views and analysis of Advisors, and are provided solely for the purpose of information, instruction and discourse. They do not constitute a solicitation or recommendation regarding any investment.
Posted by DocH at 10:10 PM