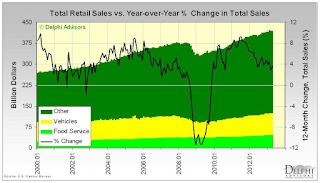 Click image for larger view
The Census Bureau reported that seasonally adjusted retail spending increased by $0.4 billion or 0.1 percent (besting expectations of a 0.6 percent drop) during April as consumers apparently used cash left in their pockets from cheaper gas to purchase other items. A downwardly revised March estimate of -0.5 percent probably helped the April estimate beat expectations.
“Lower gasoline prices and the current low-inflation environment in general are helping to offset the impact of higher taxes and encourage households to raise spending in other areas,” economist Andrew Grantham of CIBC World Markets told MarketWatch. 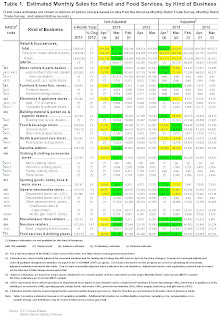 Click image for larger view
Once again, however, the majority of the rise in April’s estimate can be attributed to seasonal adjustments, as non-seasonally adjusted sales fell in every category except home-improvement stores (Building Material & Garden Equipment & Supplies Dealers). Cells with a yellow background in the figure above indicate a decline from the previous month; green indicates an increase from the previous month. In fact April’s seasonal adjustment factor was the third-largest for that month of the past decade. 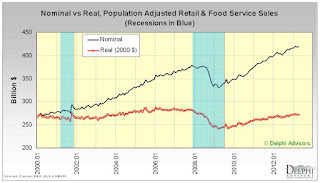 Click image for larger view
Accounting for inflation and population growth, retail sales showed a small drop. Sales have yet to recover their November 2007 high; moreover, sales are only 1.2 percent above their January 2000 level.
The foregoing comments represent the general economic views and analysis of Advisors, and are provided solely for the purpose of information, instruction and discourse. They do not constitute a solicitation or recommendation regarding any investment.