Click image for larger version
The Bureau of Economic Analysis (BEA) nudged its “final” estimate of 4Q2013 growth in real gross domestic product () up slightly, from a seasonally adjusted and annualized rate of 2.4 percent (reported at the end of February) to 2.6 percent. Three of the four categories -- personal consumption expenditures (PCE), private domestic investment (PDI) and net exports (NetX) contributed to 4Q growth; government consumption expenditures (GCE) subtracted from growth.
The improvement in this revision’s headline growth came almost entirely from the BEA’s reassessment of consumer spending on services (+0.57 percentage point, mostly from increased spending on health care). Offsetting that increase were downward adjustments to consumer spending on goods (-0.06 percent), the growth rate for inventories (-0.16 percent and is now reported to be in slight contraction) and fixed investment (-0.15 percent). Exports and imports received only minor adjustments. 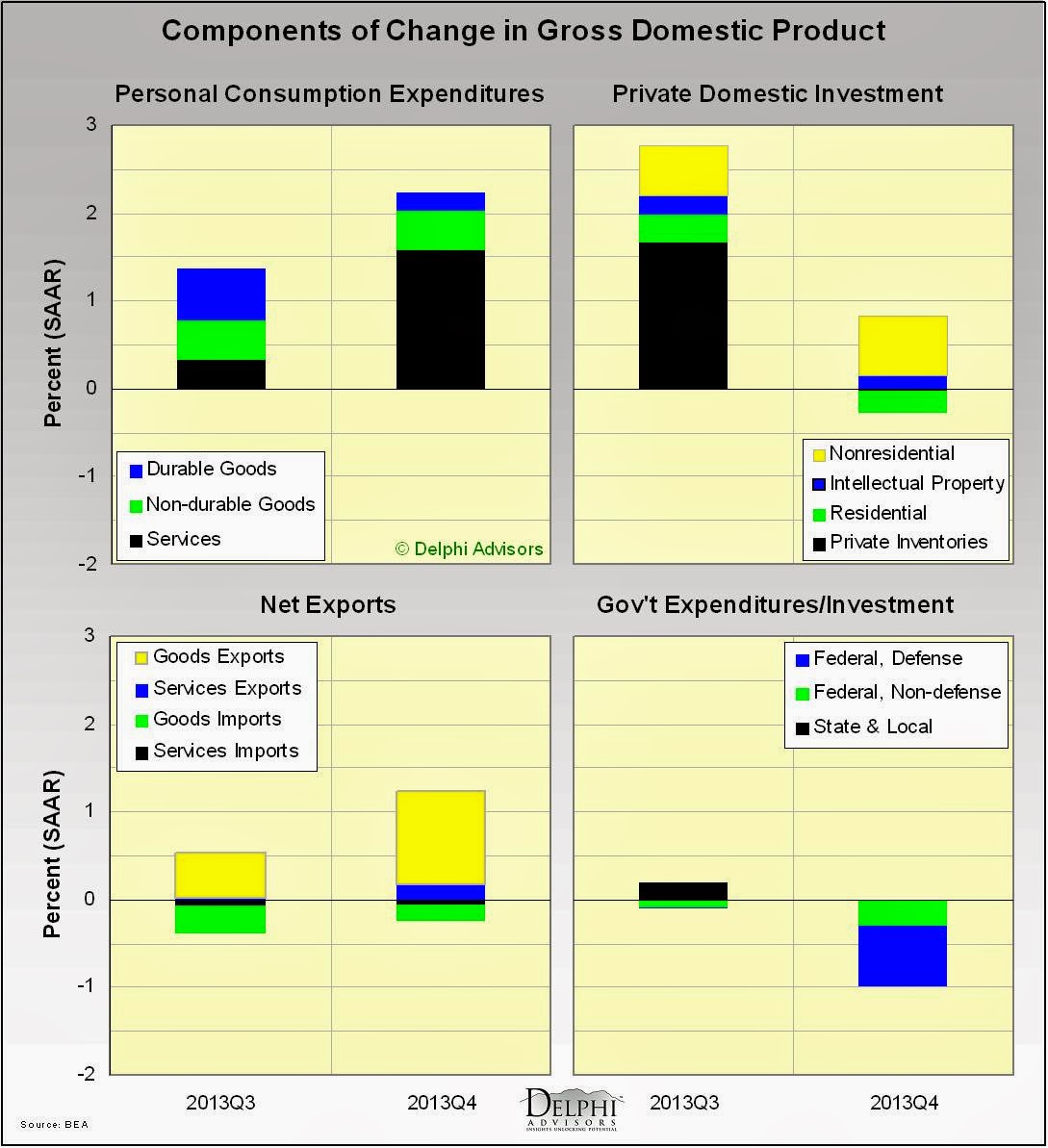 Click image for larger version
For this report the BEA assumed annualized net aggregate inflation of 1.56 percent. By way of comparison, the growth rate of the Bureau of Labor Statistics’ seasonally adjusted -U index was slightly lower (1.46 percent annualized rate); meanwhile, the price index reported by the Billion Prices Project () was substantially higher at 2.46 percent. Were the BEA’s numbers corrected for inflation using the inflation rate, the 4Q real growth rate would have been only 1.78 percent.
As mentioned above, one of the more noteworthy components of this revision is that inventories are now reported to be contracting at a marginal pace -- subtracting 0.02 percent from the headline growth rate (down -1.65 percent from 3Q). The prior three quarters saw substantial inventory expansion that had boosted the reported annualized growth rate by an average of 1 percent.
Looking forward to the 1Q2014 report, Consumer Metrics Institute () made these observations:


“The next report (the first estimate for 1Q2014) will certainly be interesting,” concluded. “It might well be distorted by the bounce-back in Federal spending, and it could reflect ongoing softening of commercial spending for inventories and fixed investments. It will also begin to display the impact of the new healthcare initiatives on household spending and the overall structure of the economy.”
The foregoing comments represent the general economic views and analysis of Advisors, and are provided solely for the purpose of information, instruction and discourse. They do not constitute a solicitation or recommendation regarding any investment.
Posted by DocH at 10:03 PM