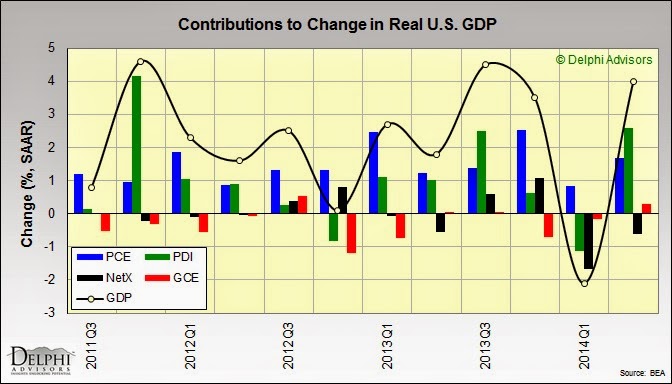 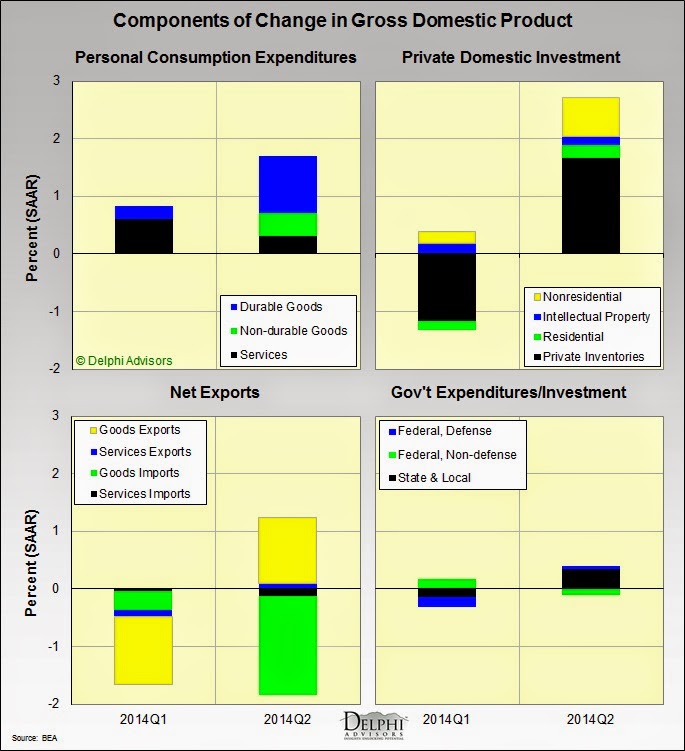 Click image for larger version
For this report the BEA assumed annualized net aggregate inflation of 1.9 percent. By way of comparison, the growth rate of the Bureau of Labor Statistics’ concurrent seasonally adjusted -U index was 3.5 percent (annualized); meanwhile, the price index reported by the Billion Prices Project () was 2.7 percent. Were the BEA’s nominal estimates corrected for inflation using the CPI-U, 2Q real would have grown by 2.5 percent; if using the inflation rate, growth would have been 3.3 percent.
Much as we welcome the pickup in growth, and would like to believe Fed Chair Janet Yellen is correct when asserting that “economic activity is rebounding,” several details prevent us from wholeheartedly embracing that idea:
·     Advance GDP estimates have typically turned out to be little better than “wild guesses.” The first quarter of 2014 was a prime example of this; the advance estimate of +0.1 percent was subsequently revised to -1.0 percent, then -2.9 percent, and finally (as part of the BEA’s annual revisions) to -2.1 percent. Granted, it is possible future revisions will show an even greater rate of 2Q growth (one analyst predicts 5.0+ percent), but we remain skeptical.
·     As we have mentioned many times before, inventories are ultimately a zero-sum game. Consumer Metrics Institute observes that inventories are also highly volatile -- because of both business cycle factors and the BEA's inventory measurement-and-valuation methodologies. Consequently, the BEA removes inventories from its "bottom line" indicator of real final sales of domestic product. By that measure, the economy was growing at a much more modest 2.3 percent -- one reason why The Wall Street Journal dubbed 2Q as “still a 2 percent growth economy.”
We intend to wait until the dust from upcoming revisions has settled before entertaining thoughts of festivities to celebrate the stronger GDP number.
The foregoing comments represent the general economic views and analysis of Delphi Advisors, and are provided solely for the purpose of information, instruction and discourse. They do not constitute a solicitation or recommendation regarding any investment.