May 2016 ISM and Markit Reports 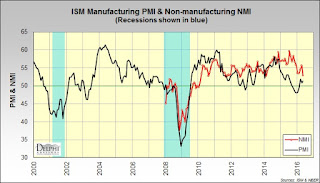 Click image for larger version
The Institute for Supply Management’s (ISM) monthly opinion survey showed that U.S. manufacturing’s pace of expansion expanded slightly during May. The registered 51.3%, an increase of 0.5 percentage point from the April reading of 50.8%. (50% is the breakpoint between contraction and expansion.) ISM’s manufacturing survey represents under 10% of U.S. employment and about 20% of the overall economy. Perhaps the most noteworthy change was another substantial jump in input prices. Otherwise, except for slow deliveries, sub-index values either remained at/below breakeven or were unchanged/lower than in April. 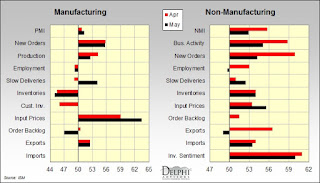 Click image for larger version
Wood Products and Paper Products both expanded, thanks to new orders, production, employment and exports. “Market is improving steadily in both orders and pricing,” wrote one Wood Products respondent.
The pace of growth in the non-manufacturing sector -- which accounts for 80% of the economy and 90% of employment -- decelerated in May. The NMI registered 52.9%, 2.8 percentage points lower than the April reading. The only sub-indexes with higher May values were slow deliveries and input prices. 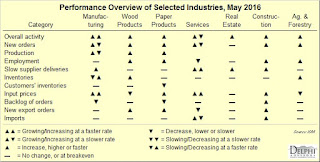 Click image for larger version
Nonetheless, all three service sectors we track reported expansion. “Projects from the oil companies are becoming less and less [because of] budget problems for capital projects,” observed one Construction respondent.
Relevant commodities --
* Priced higher: Diesel (all grades), gasoline, oil, petroleum-based products, lumber products, and paper.
* Priced lower: Corrugated boxes.
* Prices mixed: None.
* In short supply: Construction labor.
One pair of ISM’s and Markit’s May surveys diverged (manufacturing) while the other pair was in agreement (services). Instead of ISM’s marginal improvement, Markit’s manufacturing PMI reported the weakest performance for over 6½ years. Both services surveys showed weaker business activity.
Commenting on the data, Markit’s chief economist Chris Williamson said:
Manufacturing -- “The survey data indicate that factory output fell in May at its fastest rate since 2009, suggesting that manufacturing is acting as a severe drag on the economy in the second quarter. Payroll numbers are under pressure as factories worry about slower order book growth, in part linked to falling export demand but also as a result of growing uncertainty surrounding the presidential election.
“For those looking for a rebound in the economy after the lackluster start to the year, the deteriorating trend in manufacturing is not going to provide any comfort.”

Services -- “The service sector reported one of the weakest expansions seen since the recession in May, adding to signs that any rebound of the economy in the second quarter may be disappointingly muted.
“With optimism about the business outlook dropping to a new post-crisis low, companies are expecting conditions to remain challenging in coming months, citing uncertainty about the presidential election as well as broader worries about weak demand at home and abroad.
“Add these disappointing service sector numbers to the downturn now being seen in manufacturing, and the PMI surveys point to GDP growing at an annualized rate of just 0.7-8% in the second quarter, notwithstanding any marked change in June.
“The slowdown and further drop in optimism continued to cause companies to pullback on recruitment, with the survey signaling just under 130,000 extra jobs being created in May, driven entirely by the service sector.”
The foregoing comments represent the general economic views and analysis of Delphi Advisors, and are provided solely for the purpose of information, instruction and discourse. They do not constitute a solicitation or recommendation regarding any investment.
Posted by DocH at 6:04 PM