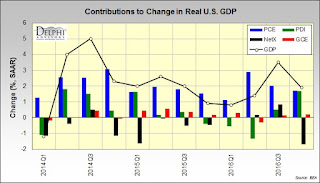 Click image for larger version
In its first (“advance”) estimate of 4Q2016 gross domestic product (GDP), the Bureau of Economic Analysis (BEA) pegged growth of the U.S. economy at a seasonally adjusted and annualized rate (SAAR) of +1.87%, down by nearly one-half (-1.66 percentage points) from 3Q2016. On a year-over-year (YoY) basis, which should eliminate any residual seasonality distortions present in quarter-over-quarter (QoQ) comparisons, GDP was up 1.91% from 4Q2015. On that basis, growth in 4Q2016 improved by 0.25 percentage point compared to 3Q.
The QoQ slowdown in 4Q’s headline growth rate came from a number of sources: growth of consumer spending on services fell by more than half (-0.68%); exports contracted (-1.69%) while imports expanded (exerting an additional drag of -0.86%). Partially offsetting those declines were upticks in consumer spending on goods (+0.34%), and increases in the growth rate for commercial fixed investment (+0.65%) and inventories (+0.51%).
Real final sales of domestic product (the BEA’s “bottom line” indicator of economic activity that excludes the influence of inventories) recorded a sub-1% growth rate (+0.87%), down over 2.17% from 3Q.
The BEA used an inflation rate of 2.12% to arrive at its 4Q real GDP estimate. Concurrent inflation recorded by the Bureau of Labor Statistics (BLS) in its CPI-U index was 3.41%. Underestimating inflation results in correspondingly over-optimistic growth rates; were the BEA’s “nominal” data deflated using the CPI-U, the headline GDP growth number would have been a much lower +0.62% annualized rate. 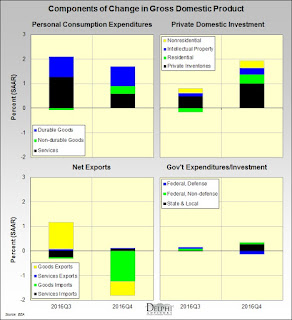 Click image for larger version
The euphoric pre-election view of the economy has given way to a more sober assessment post-election. “The U.S. economy was in decent, if unspectacular, shape at the end of 2016,” said Gus Faucher, senior economist at PNC Financial Services. That a 1.9% growth rate is described as “decent” indicates just how low the bar has been set in many economists’ minds.
The 3Q growth rate of 3.5% “was truly impressive,” concluded the analysts at Consumer Metrics Institute. “January’s fourth quarter 1.9% is just ‘kind of, sort of’ okay. And the BEA’s “bottom line” sub-1% growth rate is somewhat less than okay. It will be interesting to see just how this headline holds up in the upcoming revisions.”
The foregoing comments represent the general economic views and analysis of Delphi Advisors, and are provided solely for the purpose of information, instruction and discourse. They do not constitute a solicitation or recommendation regarding any investment.