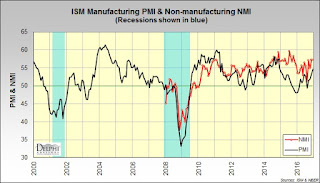 Click image for larger version
The Institute for Supply Management’s (ISM) monthly opinion survey showed that the pace of expansion in U.S. manufacturing continued accelerating during December. The registered 54.7%, an increase of 1.5 percentage points. (50% is the breakpoint between contraction and expansion.) ISM’s manufacturing survey represents under 10% of U.S. employment and about 20% of the overall economy. The most noteworthy change in the sub-indexes was the jump in input prices. 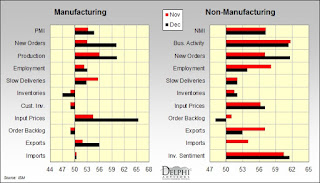 Click image for larger version
The pace of growth in the non-manufacturing sector -- which accounts for 80% of the economy and 90% of employment -- was unchanged at 57.2%. Only order backlogs fell below the breakpoint. 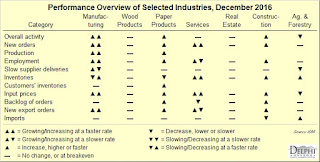 Consistency between ISM’s and IHS Markit’s surveys was fairly strong: Manufacturing PMIs accelerated in both surveys; ISM’s NMI was unchanged, while Markit’s services PMI -- although still expanding -- ticked lower.
Commenting on the data, Chris Williamson, Markit’s chief business economist said:
Manufacturing -- “The manufacturing sector ended 2016 on a buoyant note, with promising signs that growth could pick up further in 2017.
“The pace of growth signaled by the PMI in December was the strongest for almost two years, and the combination of improving current demand and optimism for a further upturn in 2017 prompted companies to build inventory and boost capacity. The latter was reflected in the largest rise in factory payroll numbers for one and a half years.
“The upturn is being driven almost entirely by rising demand from domestic customers, with exports stymied by the dollar’s recent surge.
“The improvement in the survey data raises hopes that the official data will soon likewise show signs of the manufacturing sector’s recent malaise lifting. The latest official data showed manufacturing output stagnant compared to the start of the year, but the December PMI is consistent with production growing at an annualized rate approaching 4%.”

Services -- “The U.S. economy ended 2016 on a solid footing on which sustained growth looks set to be achieved in the coming year.
“Although losing a little momentum in December, the pace of business activity growth in the services and manufacturing sectors combined remained one of the strongest seen over the past year.
“The surveys signal GDP annualized growth of approximately 2.0% in the fourth quarter, a pace which we expect to be met -- if not slightly exceeded -- through 2017.
“The upturn also continues to deliver an impressive rate of job creation, especially given the current high level of employment -- largely reflecting improved confidence about the economic outlook.
“The only real blot on the copybook was that prices charged showed the steepest rise in one and a half years, which could feed through to reduced consumption.
“The upturn in price pressures alongside the robust economic growth signaled will also add conviction to the belief that, unlike 2015 and 2016, this year will see that Fed deliver more than one rate hike, with three quarter-point interest rate rises looking the most likely scenario.”
The foregoing comments represent the general economic views and analysis of Delphi Advisors, and are provided solely for the purpose of information, instruction and discourse. They do not constitute a solicitation or recommendation regarding any investment.
Posted by DocH at 11:11 AM