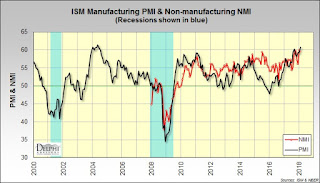 Click image for larger version
The Institute for Supply Management’s (ISM) monthly sentiment survey showed that the expansion in U.S. manufacturing accelerated in February. The registered 60.8%, up 1.7 percentage points from the January reading. (50% is the breakpoint between contraction and expansion.) ISM’s manufacturing survey represents under 10% of U.S. employment and about 20% of the overall economy. All of the sub-indexes except new orders and production were consistent with heightened activity; moreover, no industries reported paying lower input prices. 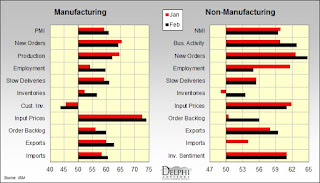 Click image for larger version
The pace of growth in the non-manufacturing sector -- which accounts for 80% of the economy and 90% of employment -- took a modest breather when decelerating slightly (-0.4 percentage point) to 59.5%. Employment and imports were the only sub-indexes with notable declines; as with manufacturing, no service industries reported paying lower prices. 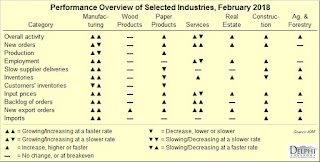 Commenting on the data, Chris Williamson, Markit’s chief business economist said --
Manufacturing: “U.S. factories are enjoying one of the best growth spells seen since 2014, boding well for the sector to make a solid contribution to GDP in the first quarter.
“The survey’s output index readings for the first two months of 2018 are indicative of the sector growing at an annualized rate of just under 3%.
“The most encouraging news was another surge in new order inflows, which helped boost optimism about the year ahead and drive further widespread job gains. Manufacturers are clearly in expansion mode, enjoying robust demand from home alongside rising export orders.
“Capacity is still being stretched, however, as indicated by widespread supply chain delays and the build-up of uncompleted orders at factories. Demand, in other words, is running ahead of supply, meaning pricing power is improving. Factory selling prices are consequently rising at the steepest rate for four years.”

Services: “A surge in service sector activity comes as welcome news after a disappointing couple of months, especially is it was accompanied by further robust manufacturing growth in February. So far, the two PMI surveys point to the economy expanding at a steady 2.5% annualized rate in the first quarter.
“With growth of new orders across the two sectors collectively growing at the fastest rate for three years, March could also prove to be a good month for business activity, rounding off a solid opening quarter or the year.
“Capacity is clearly being strained by the upturn in demand, as indicated by the largest build-up of uncompleted orders for nearly three years and reports of increasingly stretched supply chains.
“Encouragingly, business optimism about the year ahead has risen to one of the highest seen over the past three years, suggesting firms will remain in expansion mode to take advantage of the upturn. Hiring and business investment should therefore continue to rise in coming months.
“The concern is that prices continue to rise as demand outstrips supply. Average prices charged for goods and services showed the largest monthly rise since September 2014, which is likely to feed through to higher consumer price inflation.”
The foregoing comments represent the general economic views and analysis of Delphi Advisors, and are provided solely for the purpose of information, instruction and discourse. They do not constitute a solicitation or recommendation regarding any investment.
Posted by DocH at 10:06 AM