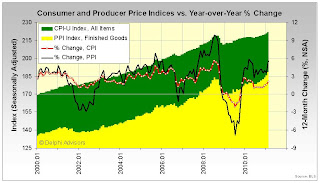 Although the seasonally adjusted increase in the all-items index was broad-based, the energy index was once again the largest contributor. The gasoline index continued to rise, and the index for household energy turned up in February with all of its components posting increases. Food indexes also continued to rise in February, with sharp increases in the indexes for fresh vegetables and meats contributing to a 0.8 percent increase in the food at home index, the largest since July 2008.

The index for all items less food and energy rose in February as well. Most of its major components posted increases, including the indexes for shelter, new vehicles, medical care, and airline fares. The apparel index was one of the few to decline.

The 12-month changes in major indexes continue to trend upward. The all-items index increased 2.1 percent for the 12 months ending February; the figure was 1.1 percent as recently as November. The 12- month increase in the index for all items less food and energy reached 1.1 percent in February after being as low as 0.6 percent in October. The 11.0 percent increase in the energy index is the largest since May 2010, while the 2.3 percent rise in the food index is the largest since May 2009.

The seasonally adjusted Producer Price Index for Finished Goods (PPI) increased 1.6 percent in February. This rise followed advances of 0.8 percent in January and 0.9 percent in December, and marks the largest increase in finished goods prices since a 1.9-percent advance in June 2009. At the earlier stages of processing, prices received by manufacturers of intermediate goods moved up 2.0 percent, and the crude goods index climbed 3.4 percent. On an unadjusted basis, prices for finished goods advanced 5.6 percent for the 12 months ended February 2011, the largest 12-month increase since a 5.9-percent rise in March 2010. 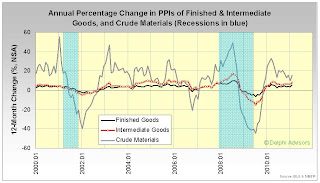 Crude goods -- The crude-goods index rose 3.4 percent in February. For the 3 months ended in February, prices for crude materials climbed 13.8 percent, subsequent to a 6.7-percent increase for the 3 months ended November 2010. Over three-fourths of the February over-the-month advance is attributable to the index for crude foodstuffs and feedstuffs, which jumped 6.7 percent. Also contributing to the rise in prices for crude goods, the indexes for crude nonfood materials less energy and crude energy materials moved up 2.3 percent and 0.9 percent, respectively. 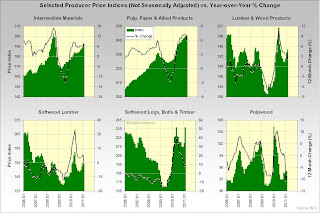 Click image for larger version
In the forest products sector, most indices we track moved higher in February. Except for pulpwood, prices are all higher than year-earlier levels although the rate of growth has slowed in several cases. 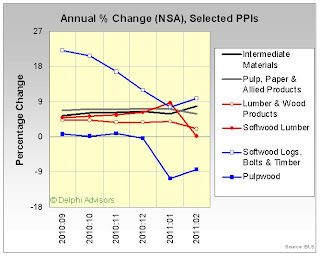 Click image for larger version
Posted by DocH at 1:48 PM