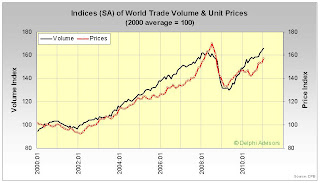 Click image for larger view
According to data compiled by the Netherlands Bureau for Economic Policy Analysis, world trade volume increased by 1.3 percent in January from the previous month, after a downwardly revised rise of 1.4 percent in December. The upsurge in trade growth that occurred in the final months of last year continued; global trade volume exceeded its pre-recession peak in December, and has pressed higher with the new year. In January, import growth went up sharply in the United States, Japan, and Central and Eastern Europe. On the export side, emerging economies continued to lead the world, but export growth in the United States continued to rise as well. By contrast, Japan’s remarkably strong December export performance was largely undone by a big decline in January.

Unit prices rose even more noticeably than trade volumes in January, jumping 2.2 percent from the previous month. Prices are still 7.7 percent below their peak, but could easily surpass that level within a few months if present trends continue. 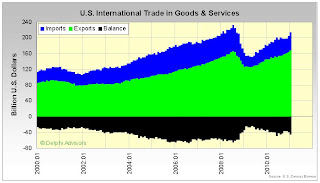 Click image for larger view
The U.S. goods and services deficit widened to $46.3 billion in January, from December’s $40.3 billion. Total January exports were $167.7 billion and imports were $214.1 billion. Import growth had been essentially flat since last June, but ramped up significantly in the past two months. Exports have risen at a more consistent -- although perhaps slower -- pace since mid-year 2010. Export growth has been about $1.9 billion per month since January 2010 -- far slower than the rate needed to meet the White House goal of doubling January 2010’s exports by 2015. Doubling will not be achieved until mid-2016 at the current rate of growth. 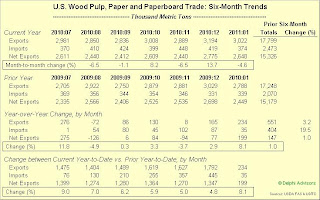 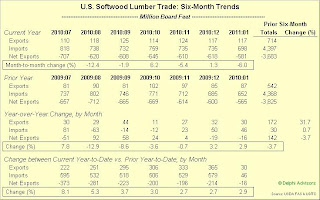