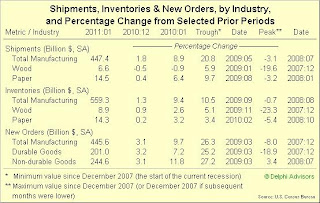 Click image for larger view
Shipments, inventories and new orders all posted gains at the total manufacturing level during January, according to the U.S. Census Bureau. 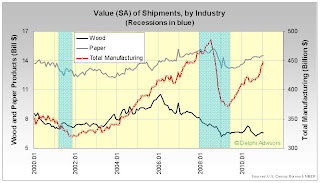 Click image for larger view
Data from the Association of American Railroads (AAR) and the Ceridian-UCLA Pulse of Commerce Index (PCI) help round out the picture on goods shipments. AAR reported a substantial drop in not-seasonally adjusted rail shipments during January, relative to December; on a seasonally adjusted basis, total shipments were up 1.8 percent. The PCI (which measures diesel consumption of highway trucking) also fell by 0.3 percent. Adverse winter weather was blamed for the poor PCI showing. 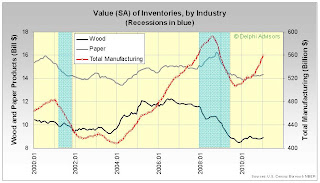 Click image for larger view
Inventories, up 12 of the last 13 months, increased $7.1 billion (1.3 percent) to $559.3 billion, following a 1.4 percent December increase. Transportation equipment had the largest increase in the durable goods component, while petroleum and coal products led the rise in nondurables. Wood and Paper inventories both ticked up in January, by 0.9 and 0.2 percent, respectively. 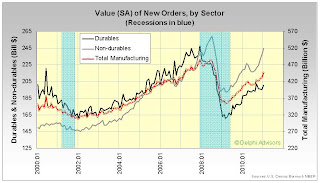