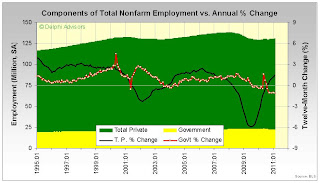 Click image for larger view
The U.S. economy added 192,000 nonfarm jobs in February, and the unemployment rate ticked down by 0.1 percentage point to 8.9 percent (the lowest rate since April 2009). February’s job-creation rate was much more robust than January’s upwardly revised figure of 63,000 (originally 36,000). We are also encouraged to see that 304,000 persons found full-time work, thereby reducing the rolls of part-timers by 67,000. 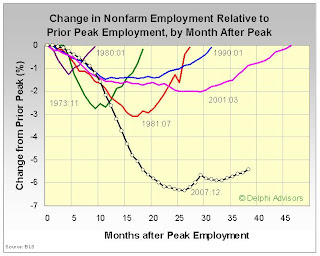 Click image for larger view
Despite the upturn in employment, the chart above shows how much ground remains to be regained. That chart tells just part of the story, however, because returning to “zero” means only that the number of persons employed is equal to the peak of December 2007; it does not include the 150,000 persons of employable age added by population growth each month. 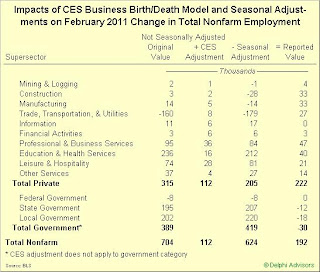 Click image for larger view
As has happened for the past several months, the unemployment rate dropped primarily because of the number of people who gave up looking for work and thus were no longer considered officially unemployed. I.e., the improvement occurred not because of a wholesale jump in hiring, but rather because so many people dropped out of the system. A near-record 6.4 million people were not counted as being in the labor force, but would like a job now. Also, the total number of persons not considered part of the labor force jumped to a record high of 86.2 million.

Another discouraging aspect of the report included a civilian labor force participation rate that remained unchanged at 64.2 percent (a 27-year low).
Posted by DocH at 4:36 PM