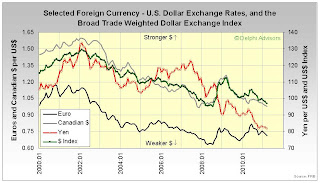 Click image for larger view
For a third consecutive month, the U.S. dollar lost ground “across the board” against the other currencies we track. As was the case last month, the largest percentage drop occurred versus the euro. On a trade-weighted index basis, the dollar depreciated 1.0 percent against a basket of 26 currencies.

Europe: As with Canada’s loonie, the euro rose on speculation the European Central Bank may raise interest rates earlier than the Federal Reserve. Even the seeming inevitability of Portugal’s financial collapse in the wake of its government quitting did little to slow the euro’s rise against the dollar.

Japan: Repatriation of yen by Japanese companies in the wake of the devastating earthquake and tsunami helped boost that currency despite pre-quake intervention by the G7 countries designed to weaken the yen. Renewed carry-trade activity began to chip away at the yen’s strength as March drew to a close, but it was not enough to cause the currency to depreciate on a monthly average-value basis against the dollar.
Posted by DocH at 1:25 PM