Click image for larger version
The Bureau of Economic Analysis (BEA) estimated 1Q2013 growth in real gross domestic product () at a seasonally adjusted and annualized rate of +1.8 percent, 0.6 percentage point lower than the previous (preliminary) 1Q estimate. This growth rate was 1.4 percentage points higher than the 4Q2012 estimate. Personal consumption expenditures (PCE) and private domestic investment (PDI) added to 1Q growth, in that order; government consumption expenditures (GCE) and net exports (NetX) dragged on growth. For reasons explained below, this latest estimate is perhaps a truer reflection of the state of the economy than were the prior 1Q estimates. 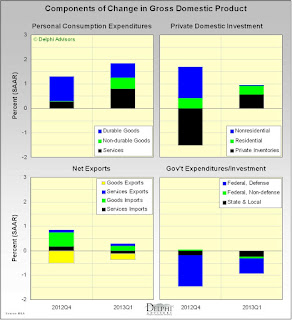 Click image for larger version
“A significant revision to consumer spending on services was large enough to account for the entire downward adjustment in the headline number,” wrote the analysts at Consumer Metrics Institute (). “That was accompanied by materially weaker exports and fixed investments. All of those revisions were enough to lower the BEA's bottom line "real final sales of domestic product" by over 0.5 percent.”
For this set of revisions, observed, the BEA assumed annualized net aggregate inflation of 1.26 percent. In contrast, during the first quarter (i.e., from December to March) the seasonally adjusted -U index published by the Bureau of Labor Statistics () rose by 2.10 percent (annualized), and the price index published by the Billion Prices Project () rose at an annualized rate of 5.35 percent. Had the -U been used to convert the "nominal" numbers into "real" numbers, the reported headline growth rate would have been a much more modest 0.96 percent. And if the index (which, argued, best reflects the experiences of the American consumer) had been used as the deflator, the economy would have been reported to have been contracting at a -2.30 percent annualized rate.
Finally, real per capita disposable income was revised lower once more. In this report real per capita disposable income contracted during the quarter at an astonishing -9.21 percent annualized rate.
wrapped up their observations with the following:
At best this new release reports an economy with lackluster growth, created at great expense by a combination of unprecedented fiscal and monetary stimulus that have obviously progressed well past the point of diminishing returns. To be fair, many other national governments would be thrilled to be reporting a 1.78 percent annualized growth rate. But that observation in itself (without mentioning the plunging export numbers) also reflect global economic headwinds that do not bode well for sustaining even lackluster numbers over the balance of the year.
And we continue to note the one truly serious domestic issue within the data:
-- Real per capita disposable incomes took yet another hit. The astonishing annualized contraction of real per capita disposable income has now reached -9.21 percent -- dwarfing the -7.52 percent contraction rate recorded in 1Q2009 (the worst quarterly contraction recorded during the official duration of the "Great Recession").
From time to time we may quarrel with the quality of the BEA's deflators. And frankly we may even find that at face value the lackluster numbers amount to nothing more than a sham "recovery." But the most shocking part of this report is glaringly obvious from the real per capita disposable income numbers: all of the unprecedented fiscal and monetary stimulus has left American households materially worse off than they were two years ago.
Troubling indeed.
The foregoing comments represent the general economic views and analysis of Advisors, and are provided solely for the purpose of information, instruction and discourse. They do not constitute a solicitation or recommendation regarding any investment.