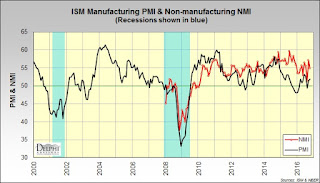 Click image for larger version
The Institute for Supply Management’s (ISM) monthly opinion survey showed that the pace of expansion in U.S. manufacturing edged higher during October. The registered 51.9%, an increase of 0.4 percentage point. (50% is the breakpoint between contraction and expansion.) ISM’s manufacturing survey represents under 10% of U.S. employment and about 20% of the overall economy. Sub-indexes with lower values in October included new orders, inventories, customer inventories, and order backlogs. 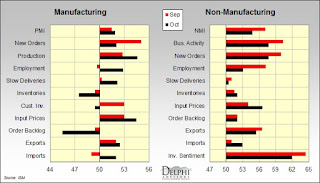 Click image for larger version
The pace of growth in the non-manufacturing sector -- which accounts for 80% of the economy and 90% of employment -- slowed in October. The NMI registered 54.8%, a 2.3 percentage point drop. Sub-indexes with a higher October value included inventories, input prices, and imports. 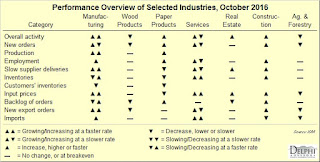 Consistency between ISM’s and IHS Markit’s surveys was mixed in October; Markit’s surveys showed acceleration in both manufacturing and services.
Commenting on the data, Chris Williamson, Markit’s chief business economist said:
Manufacturing -- “October saw manufacturing enjoy its best performance for a year. Factories benefited from rising domestic and export sales, driving output higher to mark an encouragingly strong start to the fourth quarter.
“The survey also picked up signs of manufacturers and their customers rebuilding their inventories, often filling warehouses in anticipation of stronger demand in coming months.
“However, a widespread reticence to take on extra staff highlights lingering caution with respect to investing in capacity, at least until after the presidential election.
“Hiring is also being subdued partly by worries about escalating costs, with the October survey recording the largely monthly rise in factory prices for five years.
“While output growth is accelerating, so too are inflationary pressures, which will further fuel speculation that the Fed will hike interest rates again in December.”

Services -- “Indications of stronger economic growth, solid job creation, rising prices and improved business confidence all pave the way for the Fed to hike interest rates again by the end of the year.
“The surveys are signaling the largest monthly rise in business activity for nearly one year after inflows of new orders surged higher in October.
“The upturn in new work helped drive renewed optimism about prospects for the year ahead. However, it’s evident that many businesses remain cautious as the presidential election nears. As a result, employment growth across the services and manufacturing sectors remained one of the weakest seen for over three years, though still signals a respectable 130,000 rise in non-farm payrolls in October.
“There’s therefore nothing in this month’s PMI reports to deter the Fed from raising interest rates again, with a move likely to be seen in December.”
The foregoing comments represent the general economic views and analysis of Delphi Advisors, and are provided solely for the purpose of information, instruction and discourse. They do not constitute a solicitation or recommendation regarding any investment.
Posted by DocH at 10:21 AM